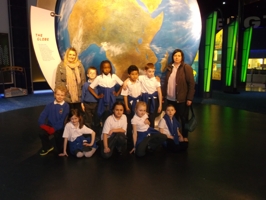 Swallows had an exciting trip to the National Space Centre in Leicester. After travelling through snow showers and rain, we safely arrived and entered the amazing building! Our first stop was ‘Into Space’, where we saw a lifesize model of the Space Station. We were very interested to see the tiny shower the astronauts have to use when they are in space!

We also got to visit the Planetarium, which was an impressive 360 cinema. We watched a show called ‘Astronaut’, and we learned what it was like to be an astronaut. The show seemed like it was 3D – it even made Mrs Robinson feel a bit poorly!

Afterwards, we visited the real rockets in the Centre. We rode the lift to the very top (it was very high)! When we got to the top, we looked down at the rockets and imagined what it would be like to be in the rocket – very scary! 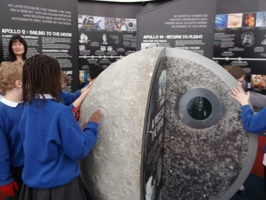 When we were at the top of the rocket, we got to see a model of the moon. Inside the model was an actual piece of moon rock! The moon also had markers to show where the different Apollo missions landed.

We had great fun pretending to be an astronaut when we stood behind the space suit, and Miss Grey took pictures of us to put into our theme books at school.

We had a brilliant time at the Space Centre and it really brought our learning to life!